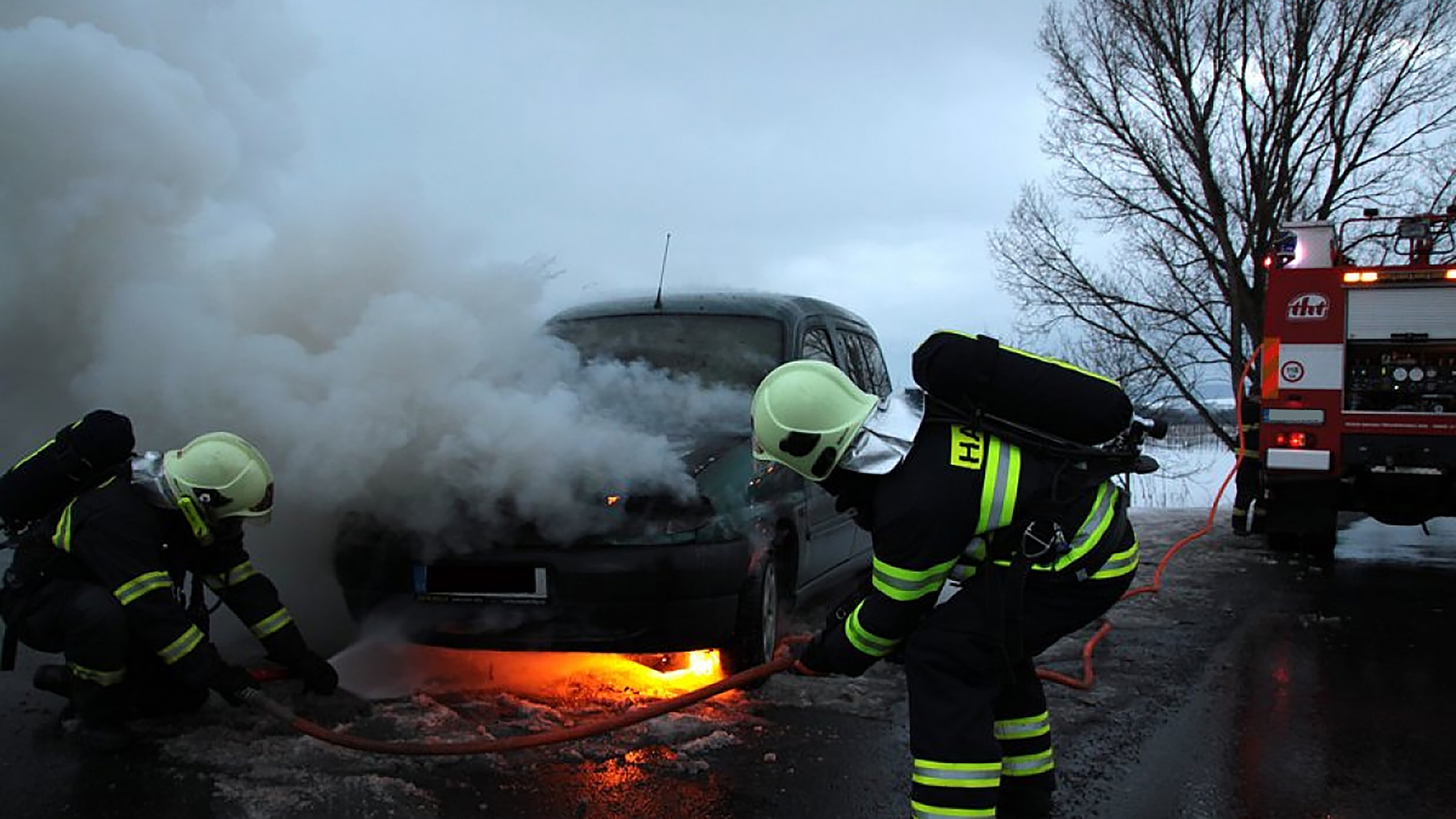 This is the question we have asked ourselves since 2012 when two Chevrolet Volts seemed to have caught fire out of the blue, while parked in a garage. We are also under the impression we get any other day another headline about a fiery Tesla crash. Are electric cars more likely to catch fire? The simple answer is, probably not. Chances are they might even be safer, though it’s tough to say that in a definitive manner. This is the answer I read in a good number of articles. Let’s have a look at some facts, figures and also statements.

The National Fire Protection Association reported about 174,000 vehicle fires in the United States for 2015. Those accidents simply don’t get reported, as there are too many of them. “A battery-powered vehicle having a fire incident is newsworthy. A gasoline-powered vehicle having a fire is newsworthy only if it stops traffic,” said Steven Risser, senior research leader at Battelle, a non-profit research and development firm, and one of the leading experts on the risk of fires in electric vehicles.

What are the main reasons why an electric vehicle catches fire?

“Tesla’s battery packs rarely incur serious damage, and when they have, the accident was highly unusual or severe,” said Tesla’s statement. NHTSA, which attributes some vehicle fires to manufacturing defects and misuse or abuse, has categorised the various causes of fires in ‘plug-in’ vehicles (both plug-in hybrids and battery-electric vehicles) as follows:

Thermal runaway or fire can occur as a result of extreme abuse conditions that may be the result of the faulty operation or traffic accidents. Failure of the battery may then be accompanied by the release of toxic gas, fire, jet flames, and explosion.

Ten years of crash testing electric/hybrid vehicles by ANCAP and IIHS, covering a wide range of crash conditions indicates the variation in crashworthiness performance of hybrid/electrical drive vehicles is comparable with the variation observed with conventionally powered vehicles. Neither ANCAP nor IIHS has observed problems associated with the electrical drive systems in tests of more than 40 hybrid and electric vehicles. This observation suggests safety designers are providing good protection of the electrical drive systems in crashes represented by federal and consumer information tests.

What happens when an EV catches fire? 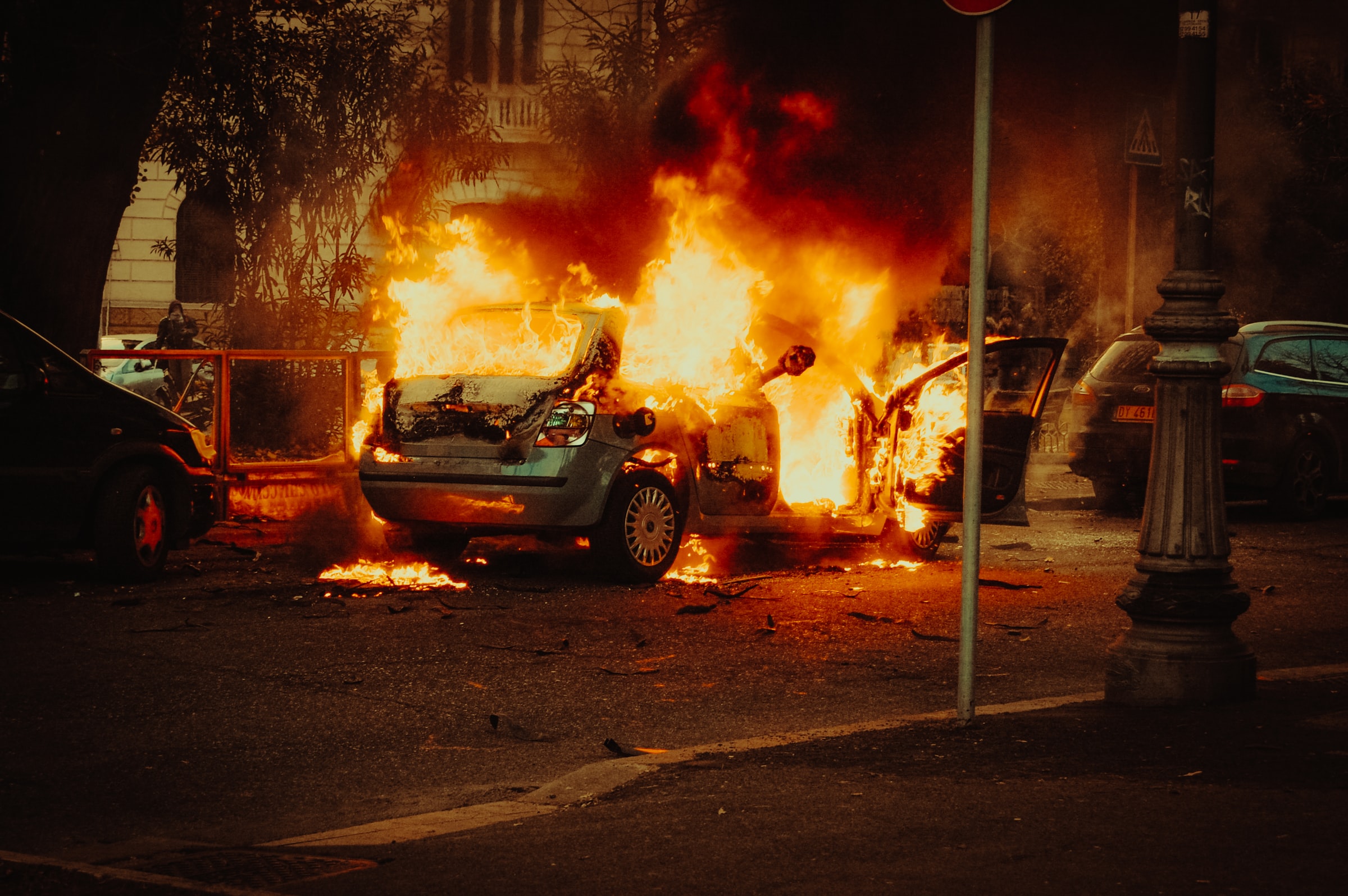 Chris Isidore explains in CNNMoney the biggest difference of fires in an ICE vs. an EV is the time it takes to ignite. “Gasoline fires start almost immediately when gasoline comes in contact with a spark or flame, and spreads rapidly. Battery fires typically take some time to achieve the heat necessary to start the fire.” In some instances, that delay is very good news. It can let the occupants of a car involved in a crash to get out of the vehicle before the fire starts. But it can pose its own problems. Sometimes a battery can be damaged, perhaps by the car running over some debris, and the driver might not be aware of the damage. And then a fire can start well after the initial incident. That could theoretically cause a fire after the car is parked in a garage.

Fire Rescue Battalion Chief Robert Diferdinando told the Sun-Sentinel, “We have a problem where the car keeps catching fire because the battery pack itself hasn’t drained yet.” He went on to explain that the battery still has power after the fiery crash and keeps sparking flames.

Tesla warns first responders that it can take 24 hours for a battery fire to be fully extinguished.

What is the car industry doing about this?

Carmakers are very proactive – apart from writing firefighter guidelines, engineers took the learnings from Computer and Mobile Phone Battery failures in the early 2000s to better protect car batteries. Thermal runaway was addressed by designers and engineers of electric cars to help prevent the type of overheating and battery explosions that have been documented with mobile phones and computers, explains Malcolm P. McConnell, III from Allan and Allan. “To prevent thermal runaway, the vehicle’s batteries are typically surrounded by a protective cooling shroud filled with chilled liquid coolant from a traditional-style automotive radiator. In the event the batteries do overheat despite their external cooling, batteries in all models of electric vehicles are installed in an array rather than as one large battery pack. These battery clusters are further divided by firewalls that limit the amount of damage each is capable of causing if it were to malfunction.”

Matthew Debord from Business Insider reckons that Electric vehicles have the potential to be safer than their gas-powered relatives. But as far as lowering fire risk is concerned, we won’t have any definitive sense of whether EVs are better until there are many more on the road, or until solid-state batteries replace lithium-ion units. In all, NHTSA concluded that the likelihood of passenger injuries in crashes involving electric vehicles is actually slightly lower, meaning that they are safer to passengers than those involving vehicles with gasoline and diesel engines.

To sum it up: due to the fact that cars can start burning often only hours after the actual incident and that once caught on fire, it is rather hard to stop it, Electric Vehicles had been marked as “dangerous” (even though they don’t carry a highly explosive liquid in their core). Witch hunts have happened always across the centuries: the unknown and powerful was feared by the general public. Living in the 21st century is giving us the opportunity to collect and compare data, upon making up our minds. Statistics show that EVs are not more dangerous than ICEs – based on current learnings, it seems to be that they might be even safer.