Over the last weeks, restaurants and pubs have re-opened, giving us the opportunity to share a good meal or a pint with family or friends after months of being unable to do so. Finally, the efforts taken by all the population seem to be reaping their benefits. Let’s remain careful but cherish this moment.

Yet, the joy of planning a night on town quickly subsides as soon as our colleague merrily tells us that he has just booked a table at the trendy new restaurant in Valletta or St Julian’s.

Two evening meccas, one clad with history, the other full of lights. But both happen to be devoid of too many street-side parking spaces. Admittedly, this may be a rather simplistic reflection of reality, but far too often, realistic. Yet, just up to a few years back, this was rather a take it or leave it option. Things are finally changing, and this is where ridesharing comes in. 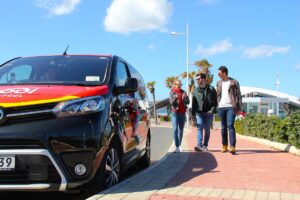 Ridesharing is an innovative concept that can transform the way we get to our destination. And the benefits, are quite substantial.
In many cities around the world, congestion on the roads is being eased with many people sharing cars together. As a nation obsessed with driving our cars, we fail to realise how much time we lose out driving our own car. An NSO study published a couple of months back, has shown that on this little island of ours, people take 26 minutes, on average, to commute to their workplace – and that’s not taking into consideration finding a parking slot, which might not be that close to their point of destination.

Back to our night on town. Getting to our destination will more often than not include paying for a rather expensive spot in some hotel carpark or parking slot. That might actually drive the cost of our drive upwards to what we’ll pay to a ridesharing service. Better than that, not being on the wheel for the night, we can responsibly have that extra drink that law, safety and common sense would otherwise prohibit.

But ridesharing is more than this. It has liberated people, giving them an alternative to the ‘take it or leave it option’. It is not uncommon for people who are not comfortable driving at night to skip on the opportunity to join their workmates’ fun night out, or for the elderly not to visit their relatives because public transport connections are not ideal.

Secondly, it encourages integration. A number of social anthropologists have described ridesharing as the greatest social dispersion agent of the decade, helping people to meet, connect, become more tolerant and less isolated.

Thirdly, it reduces congestion on the roads and contributes to a cleaner environment. Data collected by a local ride sharing company in 2020 shows that the trips taken by commuters who reached their destinations in the comfort of a Cool ride have ensured a reduction of some one million vehicle kilometres which would have otherwise been travelled by single-occupancy vehicles. Besides reducing traffic these shared rides have reduced some 250,000 in carbon dioxide emissions from being dispersed in Malta’s environment.

Very often, here in Malta, we complain about traffic. What we often fail to consider is that many times we are also part of the problem. Traffic is us. Sharing rides will go a long way in improving the quality of our lives, reducing cost and improving the environment we live in. Next time you need to move around, think twice and opt-in for not only the most convenient but also a sustainable option available.