Toyota has been reconfirmed as Malta’ best-selling automotive brand for 2021 for the fourth consecutive year. Simultaneously, the authoritive portal Forbes.com, in its automotive section called Forbes Wheels, reconfirmed Toyota as the global best-selling brand of new cars for 2021.

According to Forbes Wheels, 2,027,786 Toyota models were sold around the world in 2021 alone, and the publication’s 2021 top best-sellers are in line with a longstanding pre-Covid trend in the US sales towards pickups, SUVs and other trucks.

Toyota was first introduced to the Maltese Islands in 1960 when Michael Debono became its first distributor in Europe. Today, Debono Group recognizes how its relationship with Toyota has been central to its growth and the role in the Maltese community, as Toyota proudly remains Malta’s number one brand for motor vehicles. This relationship hit a new milestone in 2019 with the introduction of the Lexus brand in Malta, which is the luxury division of Toyota.

Throughout the past 60 years, Toyota has entrenched itself in Maltese culture to become a community of its own, helping drivers reach milestones and make memories together. As the mobility industry moves forward and towards a greener way of travel, Debono Group remains confident that Toyota will remain the preferred choice for generations to come, including families.

“This result would have been impossible to attain and keep had it not been for the commitment Debono Group’s staff have to the brand, its way forward, and most of all our customers. The privilege of being named Malta’s best-selling brand for the fourth year running is also thanks to our loyal customers, who have time and time again chosen Toyota as their go-to car brand,” said Debono Group CEO Geoffrey Debono.

Focusing heavily on safety and innovation, Toyota is known for creating top-quality vehicles that last.  Another constant in Toyota’s history has also been its top marks for quality, thanks to manufacturing techniques from well-trained technicians. The brand has also enjoyed a solid reputation worldwide for building reliable vehicles, offering family-friendly options with quality interiors.

As for its vision for 2022, Toyota announced and unveiled brand new electrified products along with Lexus. This will be key given the company’s carbon-neutral strategy. The brand currently boasts 52 overseas manufacturing companies, in 27 countries and regions worldwide. Its vehicles are sold in more than 160 countries and regions.

To celebrate yet another milestone in the brand’s history, Toyota Malta just launched a campaign to highlight Toyota’s Maltese trajectory and pay homage to those who have kept the brand alive. 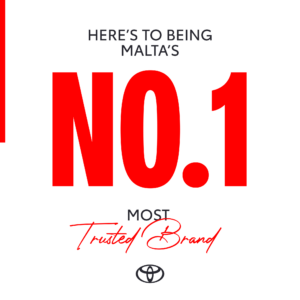