Debono Group unveiled its new corporate brand elements expressing the organisation’s heritage, culture and long-term vision. The fresh look and feel are a sharp departure from the classic motif employed in the previous brand design and communicate the group’s bold, visionary and trustworthy business philosophy.

The new visual identity forms a ‘dynamic spectrum’ and is a fitting visual metaphor for the innovative and audacious character of Debono Group. The logo was purposefully designed to bring together the companies within the group portfolio without diminishing their own individual brand personalities.

“The new brand logo reflects the vision of Debono Group for world-class solutions that raise the quality of life of clients and stakeholders,” explained Group CEO Geoffrey Debono.

Debono Group has grown into one of the foremost business organisations in Malta, earning a reputation for forward-looking ventures. The group established leadership in multiple sectors with distinctive products and services, primarily in the automotive industry.

“Debono Group has a demonstrable tradition of innovation – we have been catalysis for six decades,” said Geoffrey Debono, adding that the new tagline ‘Forward With’ is a natural extension of the group’s mission.

The fluid logo is centred around a fixed point that represents the group’s renown for attention to customer needs and for offering a client experience that is second to none. These foundations allowed the Debono Group to successfully introduce game-changing concepts to the local market.

Geoffrey Debono spoke about an ambitious multi-year strategy ahead: “Debono Group was never afraid to take calculated risk and the future we envisage is absolutely exciting. We want our business to be recognised not simply by its logo design but by the positive impact our investments make.”

Debono Group is a leader in liveability solutions leveraging cutting-edge technology to pioneer sustainable alternatives to challenges in mobility, wellbeing and business development.

Founded in 1960 by Michael Debono, the Group became the first Toyota distributorship in Europe. Since then it has continued to build a reputation for customer excellence, respect for the community, product innovation and forward-looking vision.

Debono Group embodies a dynamic business philosophy that moves ahead of trends to take society forward with it. 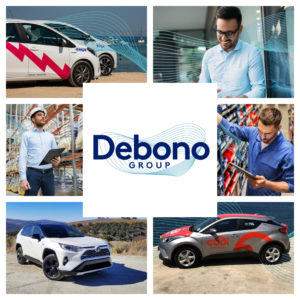