Lexus launched the all new UX model with the brand’s first Experiential Event in Malta at The Point Shopping Mall. The innovative self-charging hybrid packs the performance of an SUV into a dynamic hatchback with impressive handling capabilities.

The launch of the Lexus UX also represents the introduction of the Lexus brand in Malta by Michael Debono Limited, who has been representing Toyota for the past 60 years. Lexus is the luxury division of Toyota which is present in more than 70 countries and territories globally and has become Japan’s largest-selling make of premium cars. It has also ranked among the 10 largest Japanese global brands in market value.

Driving away in the superb Lexus UX is incredibly affordable thanks to the Lexus Flex plan, with deposits as low as 5% and sensible monthly repayment options. The financial solution is the most cost-effective method to own a Lexus, guaranteeing an advantageous and fair payment term system.

The Lexus UX sports a chiseled look with sleek lines that run through the sides and converge with a cascading roofline at the rear. The signature Lexus grille on the front gives the model a classic look that balances elegantly with the contemporary design work on the LED lights and bumper.

The model takes its name from ‘Urban Crossover’ and Lexus engineers successfully developed the concept into a premium vehicle with avant-garde technology and exceptional safety features. In fact, the UX boasts the lowest centre of gravity of any car in its class delivering superior driving pleasure and control.

The interior of the UX is a world onto its own with a well-thought-out architecture that is as aesthetically pleasing g as it is functional. Choice materials, clever compartments and instruments, and generous space ratios demonstrate the attention to detail that Lexus designers have gone into. The construction of the driver’s cabin is reminiscent of a luxury sedan but with a higher, more imposing, seating position.

The bold UX is powered by an innovative technology system that Lexus pioneered in 2005 and continued to develop at breakneck speed since. With that, the brand’s safety tech also continued to advance and the Lexus UX benefits from an extraordinary suite of driving assistance and intelligent security features.

The Lexus UX was crafted with the versatility of the contemporary urban lifestyles in mind, combining purposeful design and refined finishing with a solid performance and avant-garde safety technology.

For more information on the UX visit the Lexus Malta website on lexus.mt. Lexus is represented in Malta by Michael Debono Ltd. 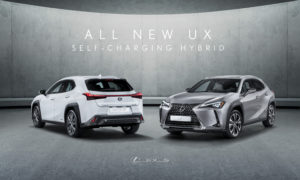